The superb mineral specimens featured below are all net priced and available for sale.   These pieces represent a very small percentage of the exquisite specimens in our inventory.   Please contact us if you wish to see a broader selection of our top-quality mineral specimens.

Also, we would be delighted to have you visit our mineral gallery in Golden, Colorado to examine these specimens in person.   If more convenient, a member of our sales team can schedule an appointment with you to bring specific pieces to your home or office. 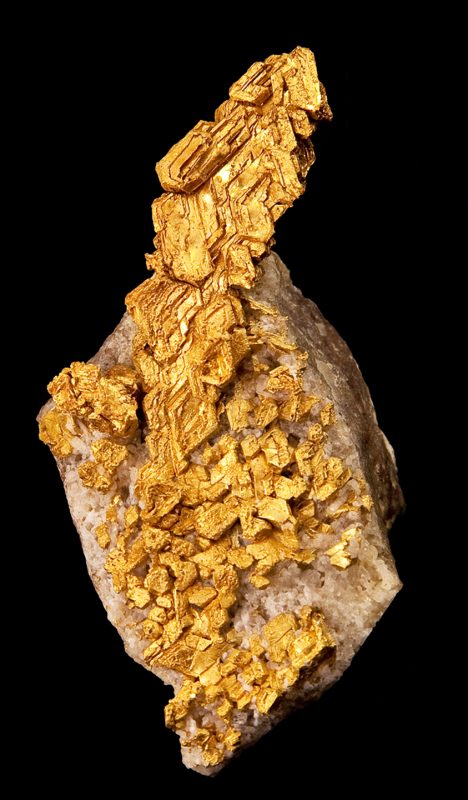 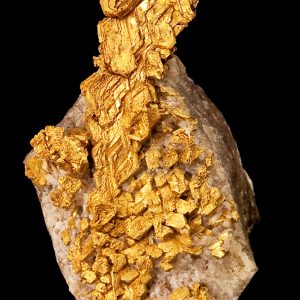 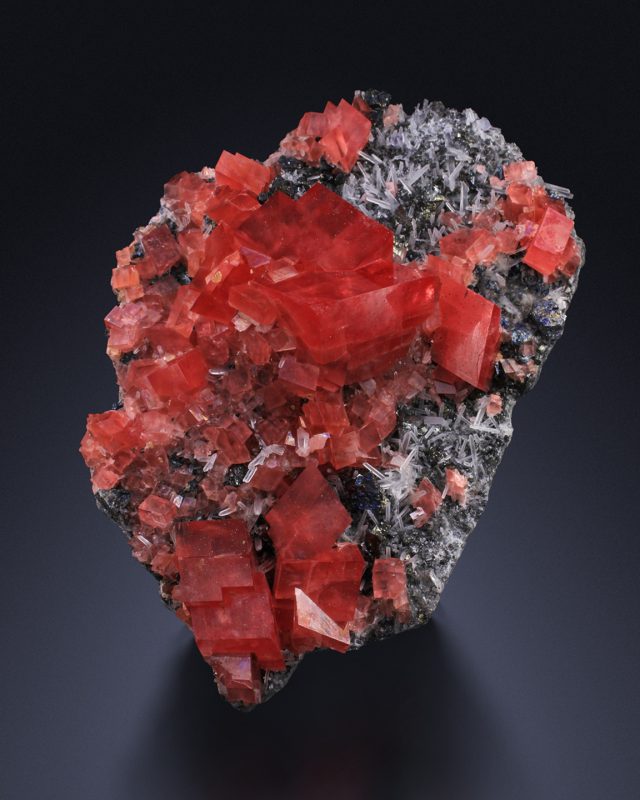 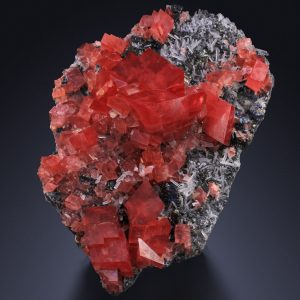 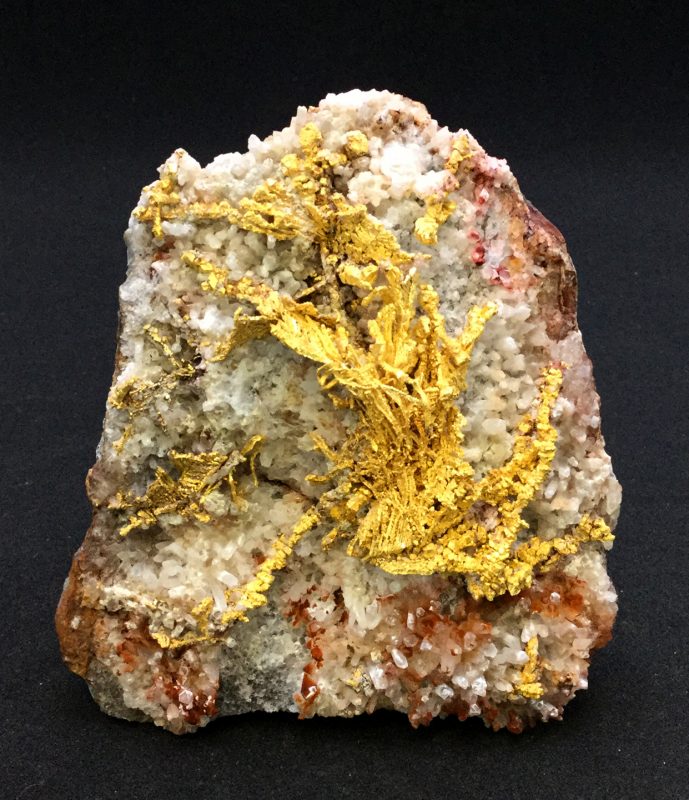 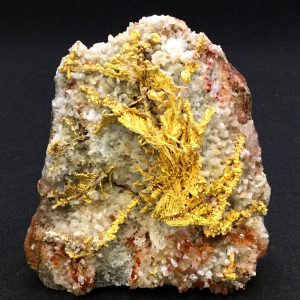 A superb example of well-crystallized gold on matrix from the Round Mountain Mine in Nevada.  For more than a decade, the Round Mountain deposit turned out some of the finest dendritic gold specimens ever produced in the USA.   This piece was selected by Keith and Mauna Proctor to be included in their outstanding collection of worldwide gold specimens.   This is a significant, bright-yellow, display-quality gold specimen. 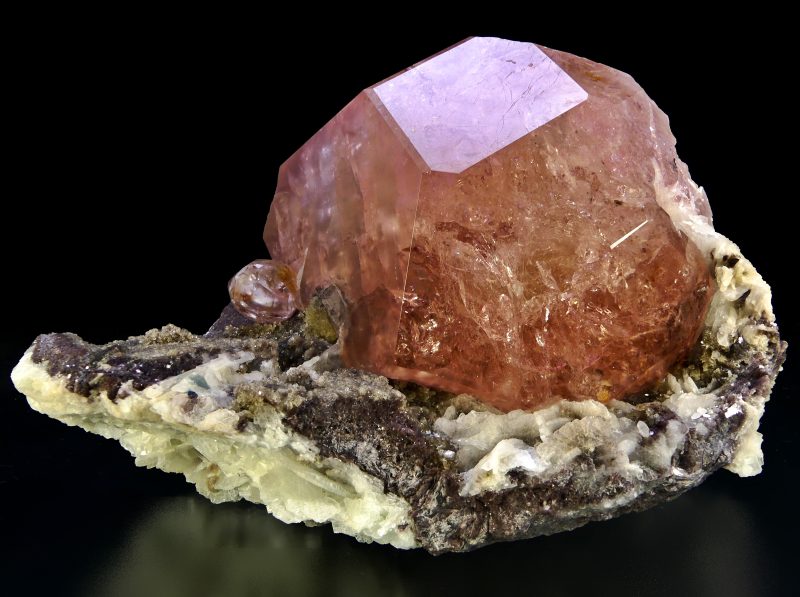 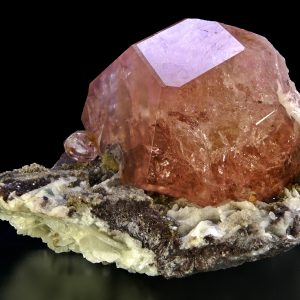 A large, vibrant pink Morganite crystal in association with lepidolite mica and albite feldspar.   A well-formed and highly lustrous crystal on a nicely contrasting matrix. 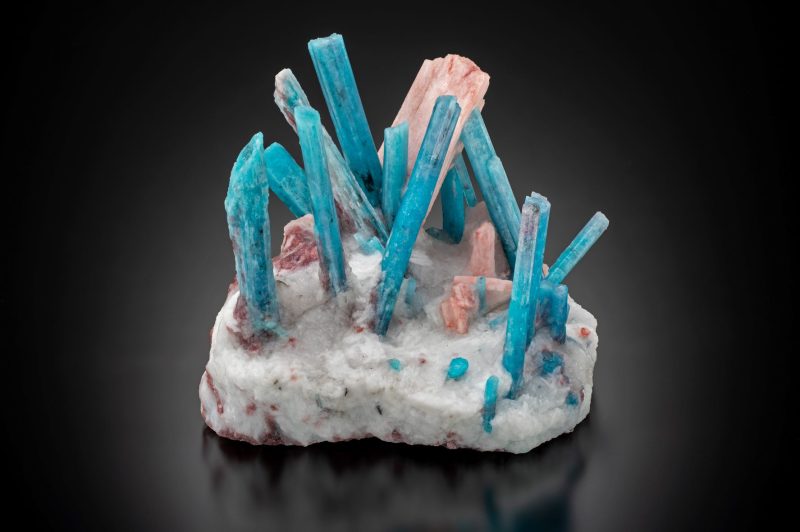 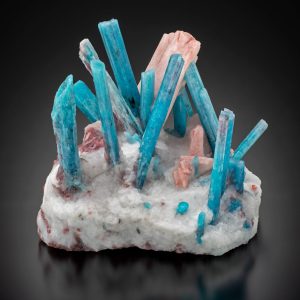 “Copper-bearing ‘Paraiba tourmaline’, a geochemical oddity, was discovered in Brazil in 1988.  Its rich and unique colors have given it extraordinary gemstone value, resulting in the preservation of very few good crystal specimens.

High concentrations of COPPER (1.5 to 2.3 weight % CuO) plus some manganese are responsible for the TURQUOISE-BLUE, tanzanite-blue, sapphire-blue, and ‘electric-blue’ colors.” …  Wendell E. Wilson (The Mineralogical Record; March-April 2002)

Initially discovered at the Batalha Mine, “Paraiba tourmaline” became one of the rarest and most precious gems in the world.  Worldwide, only five mines produce this rarity:  three of them in Brazil and two in Africa.

This specimen was recovered from the Brazil Paraiba Mine, Mulungu Site in Parelhas, Rio Grande do Norte which is the largest “Paraiba tourmaline” mine on the planet.  The gem-pegmatite rough which yielded these spectacular matrix specimens was discovered nearly 20 years ago.   Specimen preparation was a recent, collaborative effort between the Brazil Paraiba Mine and Collector’s Edge Minerals of Golden, Colorado. 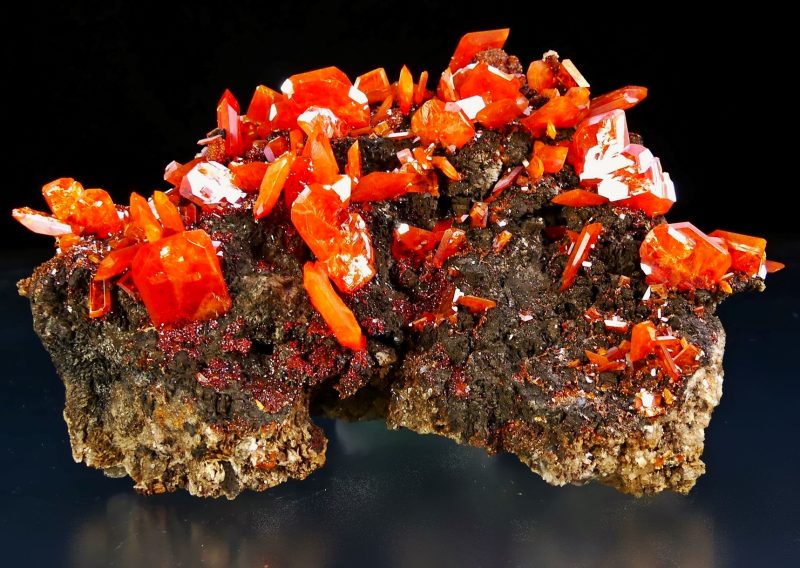 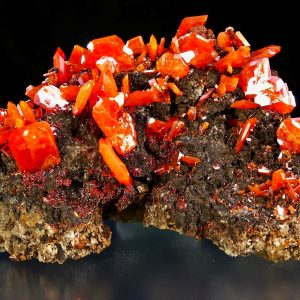 The Red Cloud mine is a small silver-lead deposit located in the arid and desolate southwest corner of Arizona.   The spectacular bright orange-red wulfenites from this mine that have been produced here since 1880 are world famous and most collectors would agree that crystals from this occurrence provide the finest examples of the species ever found.    Unfortunately, the supply of aesthetic matrix wulfenite specimens from the Red Cloud Mine has never been sufﬁcient to meet demand from museums and private collectors.

This specimen was collected in 1996.   It  features numerous brilliant reddish-orange wulfenite crystals. 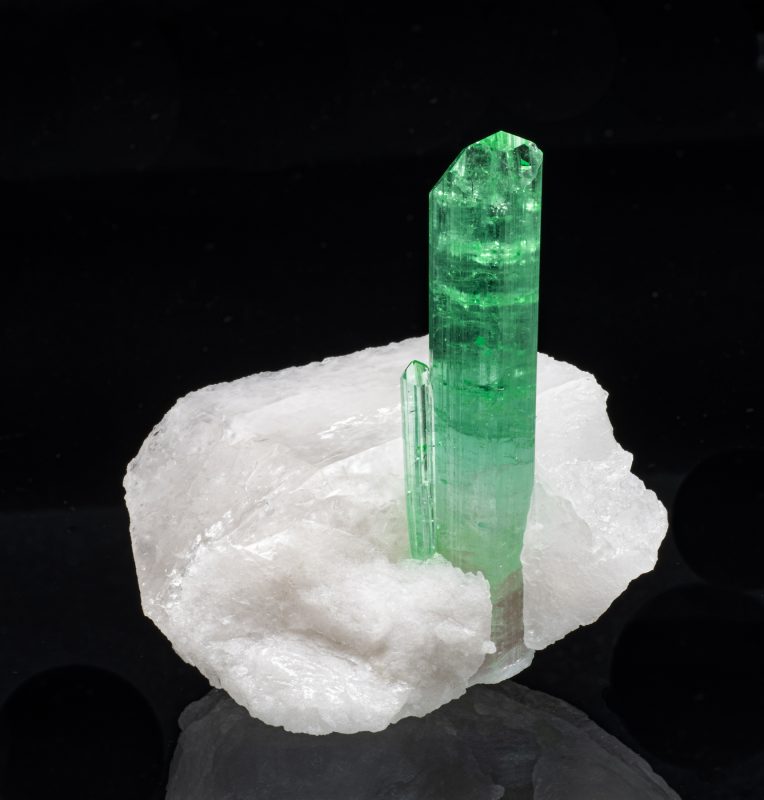 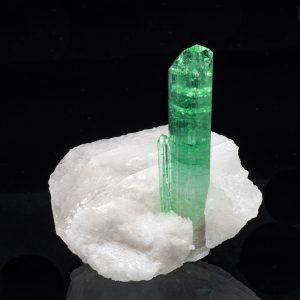 This is a gorgeous example of gem-quality, pastel mint-green elbaite tourmaline crystals on matrix from the famous Mawi pegmatite.  Mawi is well-known for these vibrant green tourmaline crystals and this is an exceptional example with outstanding color and a pair of lustrous, totally gemmy tourmaline crystals to 8 cm rising aesthetically from milky quartz matrix.  The main tourmaline crystal has a complex termination with high luster and transparency, adding to the wonderful visual aesthetics of this piece. 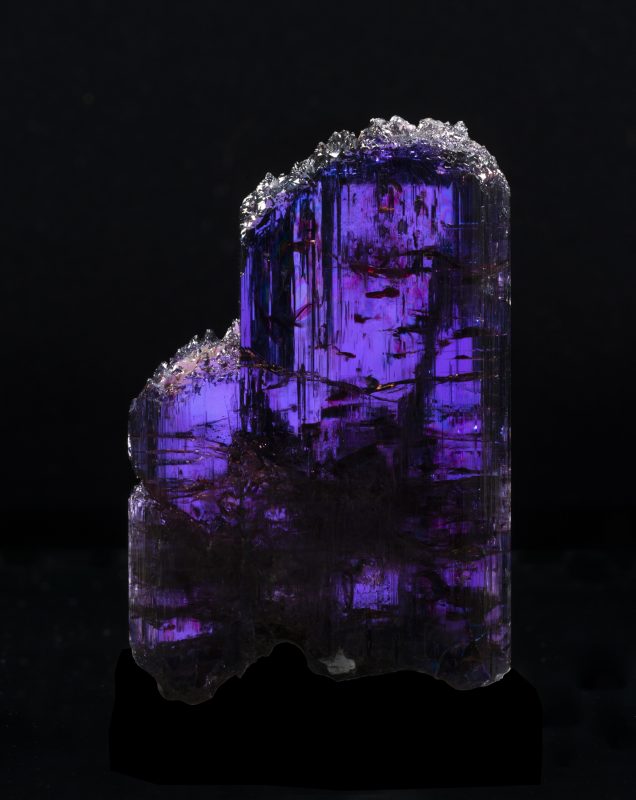 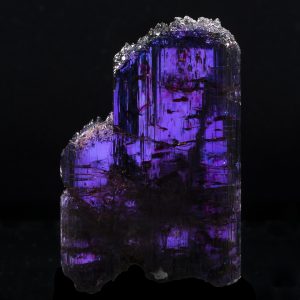 This is a superb large 7.5 cm tall Tanzanite crystal weighing 121.7 grams and has excellent color, luster, and form.  The crystal has an unusual flattened almost tabular morphology as well.  Tanzanite crystals of this size and quality are rare on the market today and this is a choice example of the species for the serious collector.

Tanzanite, the gem purple variety of the mineral zoisite, has really come into it’s own over the past few decades as one of the most desirable and popular colored gemstones. Coming from only one locality in the world, the Merelani Hills in Simanjiro District, Manyara Region, Tanzania, this gem is as rare as it is treasured. 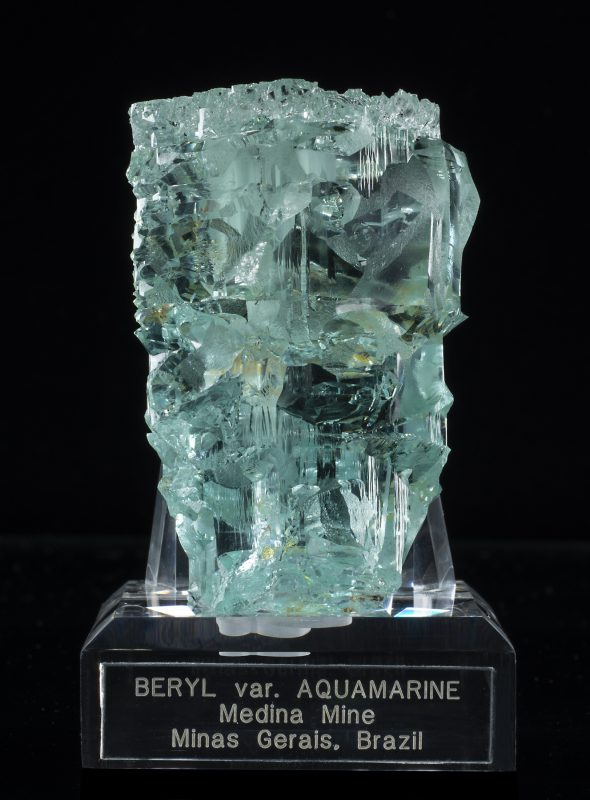 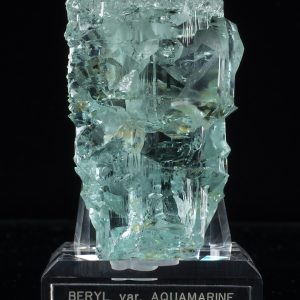 Aquamarine beryl crystals from Brazil’s Medina pegmatite district are prized by collectors and gem cutters alike for their intense blue color and incredible etching features. This superb large crystal has a wonderful rich blue color as well as mesmerizing etching features, with alternating highly-lustrous and slightly frosted faces that make it very visually-appealing. The interior of the crystal is gem-quality and clean, and at 358.8 grams it is a large single aquamarine for the locality. 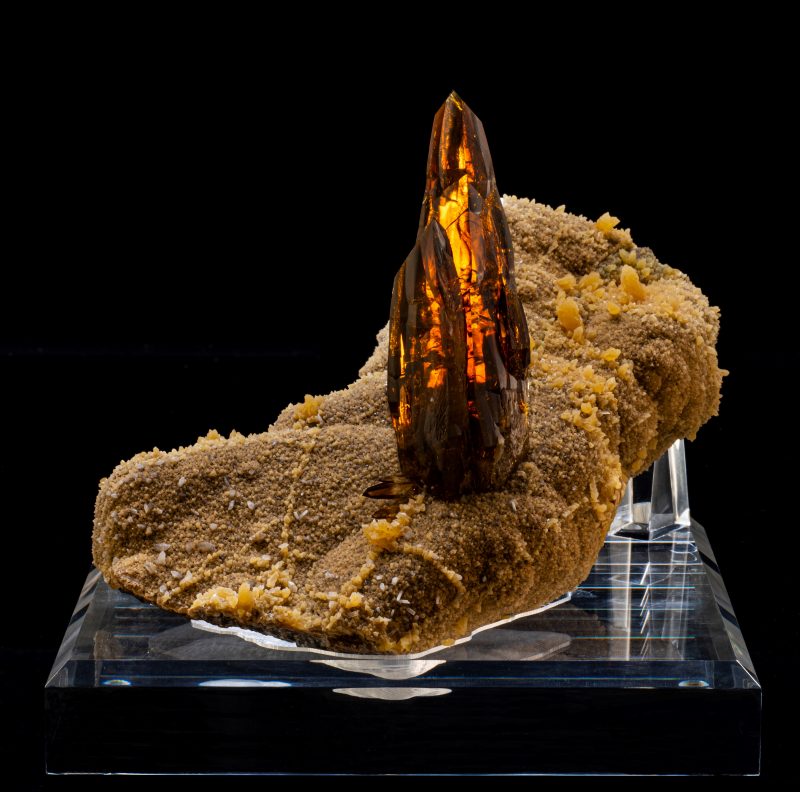 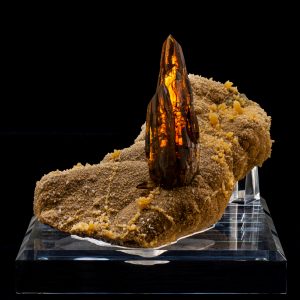 Elk Creek, South Dakota, has long been famous for producing some of the most beautiful, lustrous, gemmy golden barite in the world.    This specimen is considered to be the finest piece to have been recovered from the 2019 mining season!   The specimen features a highly lustrous, gemmy, and undamaged golden barite crystal measuring over 9 cm tall.

Collector’s Edge Minerals, Inc., through contractual agreements with one of the local ranchers, has been involved in the mining, collection and preparation of Elk Creek barite for several decades, recovering some of the finest barite specimens that have entered the collecting market. 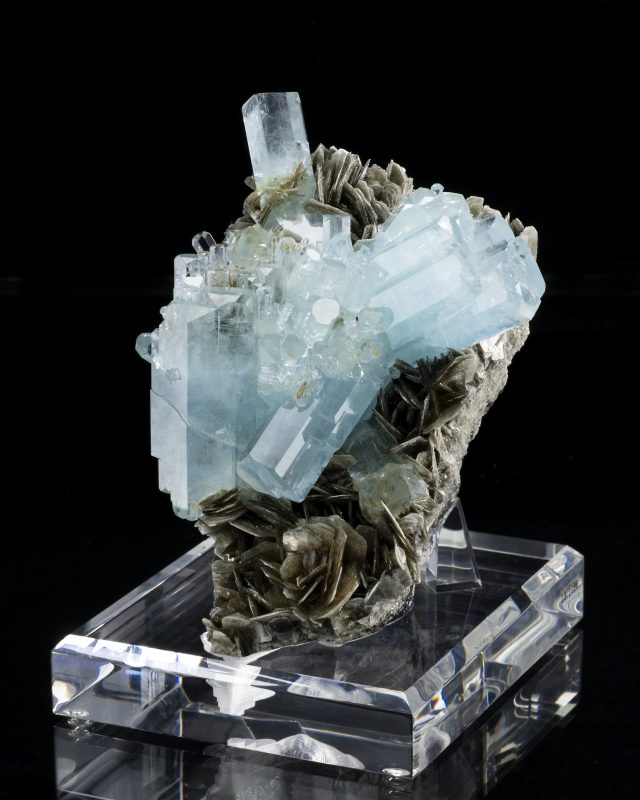 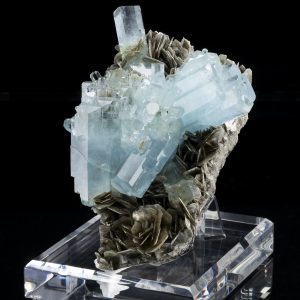 This cabinet-size specimen is in virtually-pristine condition (having no repairs or restorations) and exhibits excellent display aesthetics.  The piece displays wonderfully on it’s custom acrylic base.

A top quality Aquamarine for the serious collector. 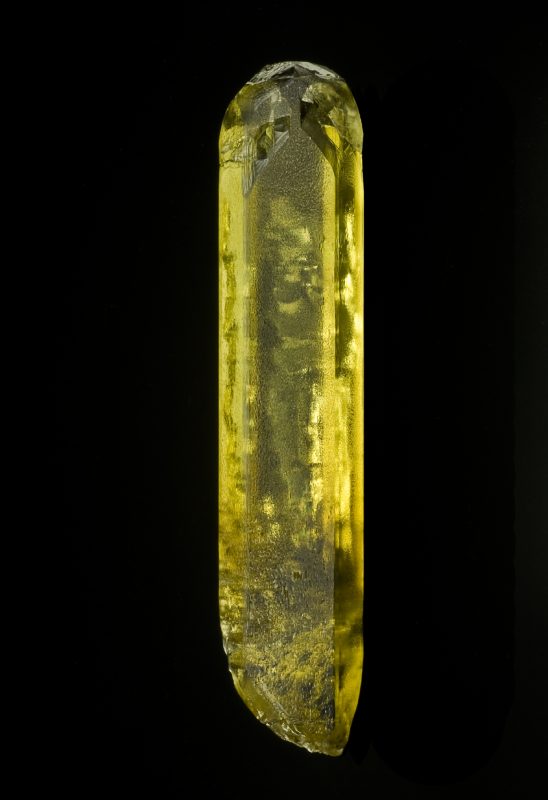 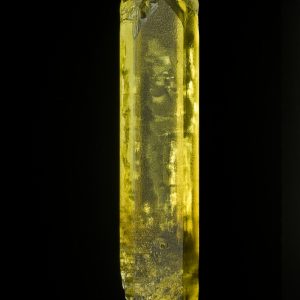 The Medina District in Brazil’s Jequitinhonha valley has produced some of the finest gem-quality aquamarine beryl crystals in the world.   Less well-known but equally notable are the world-class heliodor (golden beryl) crystals from this area.

This is a magnificent 17.5 cm tall heliodor crystal with lustrous, well-formed faces and a gem-quality interior that would yield many large cut stones.  The color is a rich saturated lemon-yellow and is exceptional for heliodor from anywhere in the world. This crystal is truly a delight to behold and will light up any room or display case.  Ex – Proctor Family Trust Collection.   The specimen was professionally repaired 7x; this repair count is a bit confusing as the repair was done to one very small area on the side of the termination where 7 tiny crystal “chips” were re-assembled to the way in which they had originally crystallized. 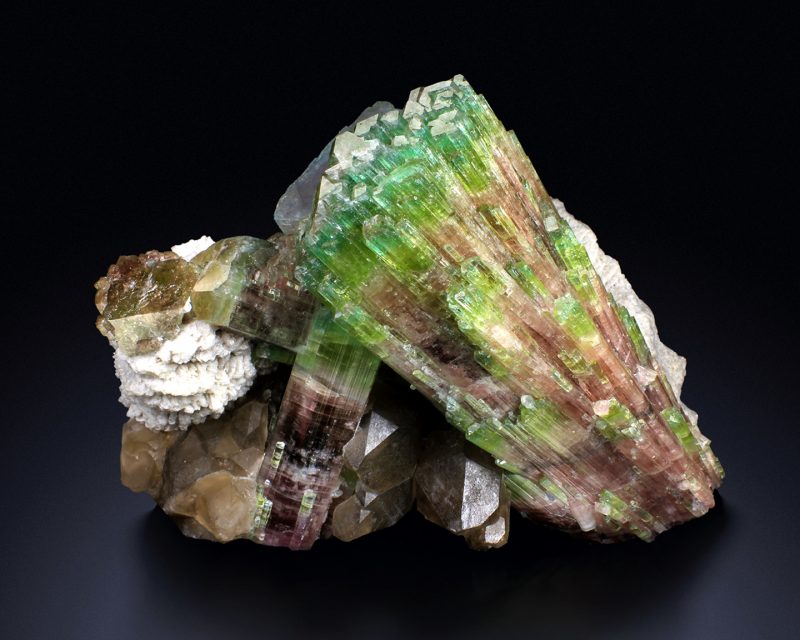 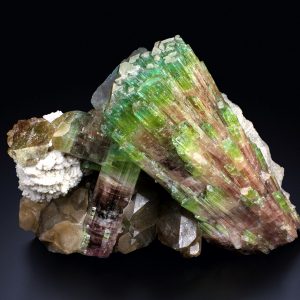 This incredible large elbaite tourmaline specimen exemplifies the best qualities of Paprok, Afghanistan tourmalines – large, lustrous, multi-color tourmalines rest dramatically on a matrix of sharp smoky quartz and white cleavelandite albite crystals.  Measuring almost 24 cm wide, this is a jaw-dropping tourmaline specimen in person, and the vibrant color zoning of the tourmaline crystals along with their large size attracts the eye from across the room.   The tourmaline crystals show the attractive “divergent fan” habit so characteristic of many fine Paprok specimens. This is a premier-quality Paprok tourmaline that demands attention. 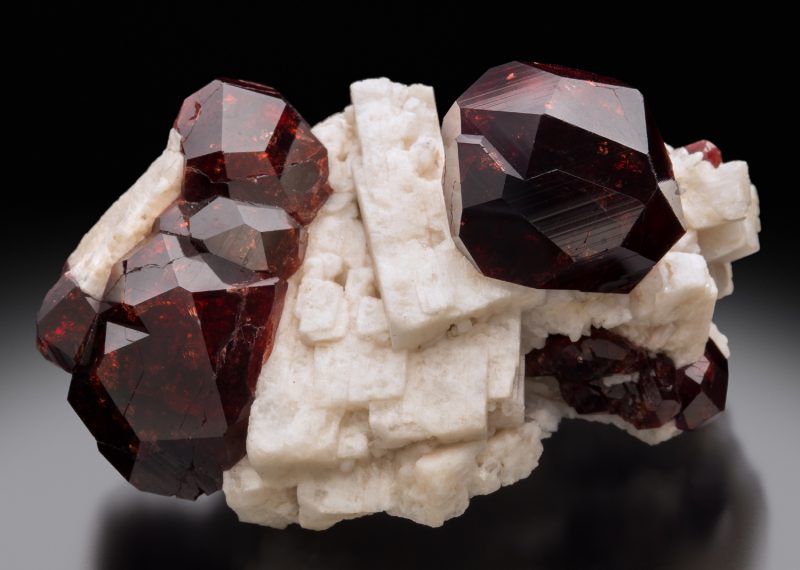 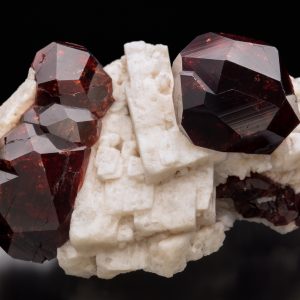 A fantastic, premier-quality spessartine garnet specimen on albite from Shengus, Pakistan.  The luster, color and placement of the crystals on the matrix is ideal and the aesthetics of the piece couldn’t be better.   This locality in the Haramosh Mountains in Skardu, Pakistan has produced some of the world’s best spessartine garnets in recent years, and this is a superb specimen for both the species and locality. 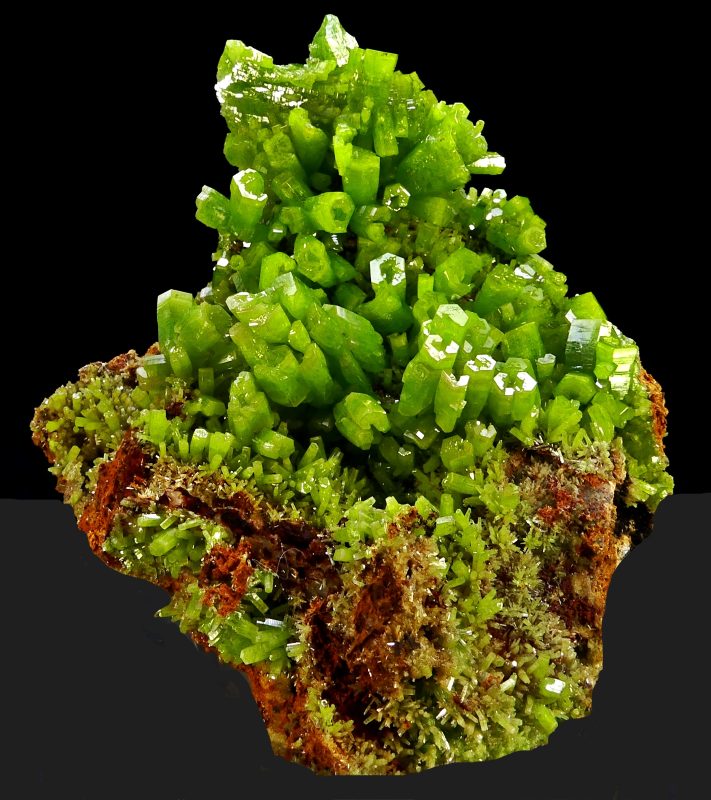 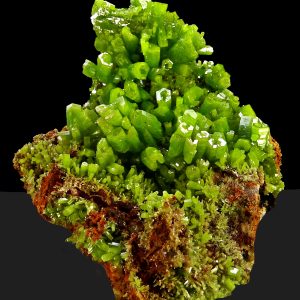 A spectacular cluster of hoppered, chartreuse-green pyromorphite crystals on a reddish-limonite matrix from the world-famous Daoping Lead-Zinc Mine in China.  This specimen has graced several, important private mineral collections since it was discovered in 2003.